← more from
Gar Hole Records
Get fresh music recommendations delivered to your inbox every Friday.
We've updated our Terms of Use. You can review the changes here.

by Nick Shoulders & the Okay Crawdad and the Lostines 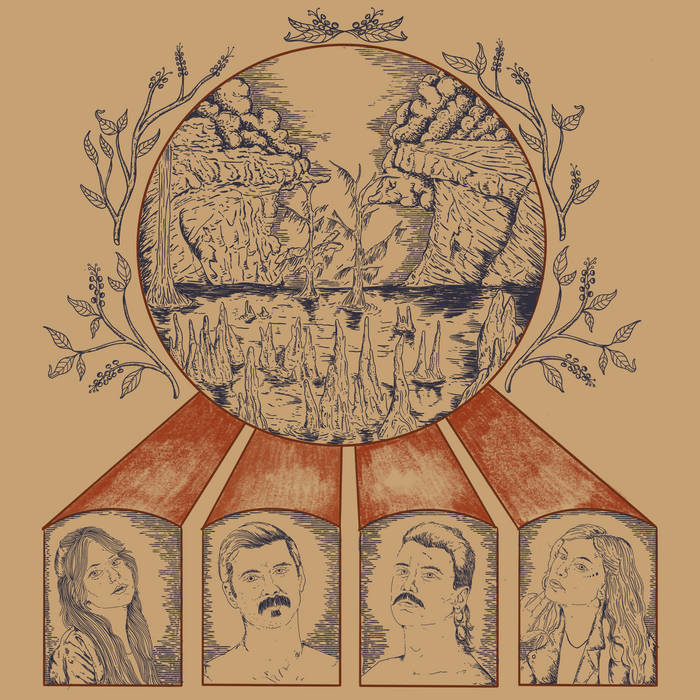 ComradeKai a beautiful and tight package with an equally beautiful vinyl. dig that sea glass green. love how these two artists sound on the same album. music like this reminds me why i love country/folky stuff. keepin' america cool. Favorite track: Heart of Glass.

The Lostines, fronted by Casey Jane Reese-Kaigler & Camille Wind Weatherford, and Nick first crossed paths during their overlapping time together living in New Orleans. It was there that both groups began their musical careers, where their love of traditional singing and early country mingled with the chaotic and eclectic landscape of the city: busking country classics on the street to tourists, performing in crusty dance-halls to swirling crowds, and collaborating in the NOLAmericana music community. Eventually, both projects found themselves in the now hallowed halls of Mashed Potato Studio, a recording project (run at the time by Duff Thompson and Sam Doores) that led to the creation of the label Mashed Potato Records. Co-founded by Doores, and run by Duff Thompson and Steph Green, MPR has developed a reputation for highlighting and capturing the best of New Orleans’ unique DIY country music scene. Both Nick and the Lostines cut their first recordings at Mashed Potato in 2017/18

Fast forward a few years. After leaving New Orleans at the start of the COVID-19 pandemic, Nick Shoulders eventually relocated to Fayetteville, Arkansas, a town where he spent much of his childhood and adolescence. With a blossoming career, a lack of other prospects, and a huge amount of uncertainty to what it would bring, Nick co-founded Gar Hole Records in 2020 with Kurt DeLashmet to create an outlet for other misfit country, folk, and Americana artists as well as his own output. Though the label has always promoted the mission of cultivating the artistic talent of Northwest Arkansas, Gar Hole has always paid special attention to what’s happening down south, and with a developing roster full of connections to New Orleans and Mashed Potato Records, a collaboration between the two labels always seemed inevitable. With the addition of the Lostines to the Gar Hole line-up, a group which so perfectly encompasses the magic of the Mashed Potato sound, it seemed like the perfect opportunity. And thus, “Heart of Night” was born.


For Nick’s tracks, he is joined by bass player and vocalist Grant D’Aubin, longtime collaborator and member of the Okay Crawdad band since the pair started playing together in 2017. The highlight is “Heart of Glass,” a cover of the legendary Blondie track that’s become a cornerstone of Nick Shoulders and The Okay Crawdad’s live setlists during their extensive cross-country tours over the last two years. Nick and the band have previously showcased their unique knack for turning covers into virtually unrecognizeable tracks all their own: a rockabilly rendition of “No Fun” by The Stooges and a lonesome country version of “Tears Stupid Tears” by Daniel Johnston on their 2018 EP “Lonely Like Me.” Here they’ve done it again, transforming this 80’s pop classic into a lazily swinging waltz, whistles and yodels where disco beats and synthesizers used to be.

This counters an electric version of “Rise When the Rooster Crows,” a reinterpretation of a historic banjo tune adapted to shed light on the plight of the modern homesick southerner. Rather than center the sentimental tropes common to country and folk songs, the song highlights the alienation and revulsion that American suburban homogeny incites in the southern heart, a scathing rebuke of the pace of capitalism and plea to see hills of home all in all. While Nick’s original version, released on his 2021 full-length “Home on the Rage,” was a solitary affair, here we see Nick backed again by D’Aubin’s masterful bass and harmonies, as well as other longtime collaborators Chelsea “Cheech” Moosekin on drums and Jason “Chooch” Norton on electric guitar.

With “Heart of Night,” Nick Shoulders & the Okay Crawdad and The Lostines have cordially invited their respective audiences to join in this chewing of the cud, weepy dance party, and act of togetherness after many years spent apart. Above all else, this collaboration is an homage to the places and people we call home. It’s the ideal accompaniment to steamy slow dancing deep in a pitch black, heavy and humid Arkansas night, or for swinging someone around in a vibrant, neon lit New Orleans dive. It’s also the soundtrack for ruminating on the heart’s capacity for simultaneous strength and fragility, the connections between different modalities, homes, and loves.

Here to put the "Try" in country. Wielding a high yodel and whistle crafted from a lifetime chasing lizards through the Ozark hills, Nick combines his family's deep ties to southern traditional music with years singing to empty street corners to create this hybridized form of raucous country music: born of some dark holler and bred to be stomped into the New Orleans dancefloors it now calls home. ... more

Bandcamp Daily  your guide to the world of Bandcamp